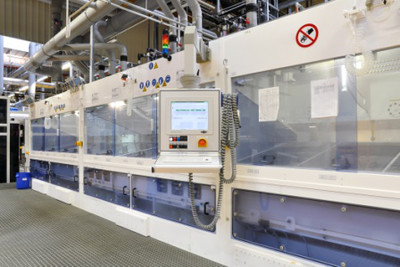 Machinery and plant are usually controlled by PLC systems or industrial PCs. Digital and analog signals undergo complex linking via programmable procedures and algorithms. But what happens when the program fails to function in the desired way, or sporadic failures and irregular patterns begin to occur? Analysis generally requires the acquisition of the relevant digital and analog signals in parallel to existing systems. This is where Delphin products can be used. They are capable of fast and parallel sampling of digital and analog signals thereby detecting errors that would otherwise remain undetected. In combination with Profi Signal‘s logic diagrams, analysis is then easy.

In the production of a chemical pre-product, unplanned downtimes occurred resulting in higher costs and caused by sporadic events at irregular intervals. A conventional data logger was initially used to detect the errors. The operator was however unable to find any faults. Either the time resolution was insufficient or the device failed when the malfunction occurred. A Message device from Delphin was then used for diagnosis purposes. This recorded digital inputs and outputs as well as analog signals. After a recording period over several weeks, the error re-occurred. The Delphin system's easy-to-use evaluation options were able to identify a malfunctioning digital contact and the problem could be rectified.

Do you have any questions or you want a product advice?

Send us an email to info@delphin.de